Day of the GIRL child – Innovating for Girls’ Education Worldwide on October 11th, 2013

SEATTLE, October 7, 2013.  – For its second observance, this year’s International Day of the Girl Child – declared by the UN – will focus on “Innovating for Girls’ Education”. The fulfillment of girls’ right to education is first and foremost an obligation and moral imperative. There is also overwhelming evidence that girls’ education, especially at the secondary level, is a powerful transformative force for societies and girls themselves: it is the one consistent positive determinant of practically every desired development outcome, from reductions in mortality and fertility, to poverty reduction and equitable growth, to social norm change and democratization.

How are you going to honor the Day of the Girl this week?

Seattle–based Global Washington is strongly focused on the work to advance women and girls by Washington-based organizations who support global development. During the months of October and November Global Washington will be organizing screenings of the influential film Girl Rising. Look out for these opportunities local media and social media.

The Bezos Center for Innovation at the Museum of History and Industry (MOHAI) in Seattle will be celebrating its opening on October 11th 2013 – it will be very curious to see how women’s role is presented in this state of the art center for innovation.

Produced by Goldbug Films with actors from Law and Order and 30 Rock, the videos teach leaders and employees how to apply innovation techniques in everyday work situations and transform organizational cultures into more innovative ones. 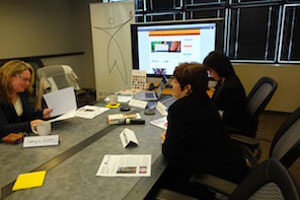 If you believe that mastering collaboration is the key to succeed in creating innovative and thriving businesses, I’d like to hear what you mean by it and how do you actually collaborate.

There is a general assumption that we know what collaboration means but I think it is a skill set that needs some “unpacking”. I believe that while women are wonderfully talented in sharing and friendship making, more often than not, they get a failing grade at collaboration that leads to innovation. Let me explain what I mean.

There are three areas that especially women need to work on.

1. Reciprocity. Collaboration succeeds only if the partners give and take; in other words, we need not only offer help but also know when to END_OF_DOCUMENT_TOKEN_TO_BE_REPLACED