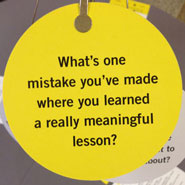 Jeff Bezos of Amazon must feel pretty strongly that being an innovator requires “a long-term willingness to be misunderstood,” because he speaks about it on several occasions. In interviews he has said that it’s important to hear people’s criticism and search within yourself about whether they are right, and, if they are, you should change what you are doing. However, “if they’re not right, if you really have conviction that they’re not right then you need to have that long term willingness to be misunderstood.”

Innovators have to believe in their inventions and their solutions even in the face of doubt and nay-sayers. Innovators’ logic is new and unfamiliar and naturally suspect. If they didn’t have the perseverance – and

the money – to go on trying we would still be in the dark ages without the modern day conveniences and achievements.

The newness of the product, the new ways of doing things threaten the present state of affairs. The human preference is to get comfortable by adapting to the path of the least resistance. We resist change until the critical mass proves the innovation acceptable, useful, better than the previous ways of doing things.  Change is good only when it increases the convenience quotient for our lives.

It was only a year ago when I finally gave up my big appointment book and started using a calendar on my computer, then on my mobile. And sharing it with others! Do you remember the times when the idea of shopping online was scary – who in their right mind would share their credit card information on the internet! Or did you ever imagine reading a whole book from a screen?

Unfortunately, our inherent suspicion keeps many of the new products and ideas from ever succeeding because the inventors run out of cash before their progressive ways become adapted. Only the most persistent, tenacious ones and those who are funded make it.

Teenagers feel misunderstood. Rebels’ activism is fueled by their experience of being misunderstood. The moment when one becomes understood, they no longer exist in the loneliness of the fringes, they have become mainstream. Innovators are working hard to get out of the fringe and to be understood, because when they are, they have achieved their goal: scale their inventions for the market.

While witnessing the great success of Amazon, Bezos must have found comfort in a saying attributed to Ralph Waldo Emerson: “To be great, is to be misunderstood.”

Are you willing to invest in a long term experience of being misunderstood?